The weather which caused so much disruption across North East Wales on Sunday put the dampers on plans by Eva Brewer of Prestatyn to complete the equivalent of three marathons in three days.

Eva, who is coach to Prestatyn Running Club’s juniors and is employed by Welsh Athletics as clubs network officer for North East Wales, set herself the ambitious target to raise funds for a defibrillator. It will be available at a junior parkrun she is launching in Prestatyn in the New Years and a senior parkrun at Bodelwyddan Castle.

Eva set out from Bangor on Friday and ran alone to Llandudno where she was joined by club members the following day. Mike Davis, Gareth Hughes, Sue Rodgers, Ally Reid, Jo Edwards, Naomi Cane and Julia Evans then ran various stages with her on the way to Prestatyn .

The third and final stage was to be to Deeside on Sunday but for safety reasons Eva postponed it to a later date. 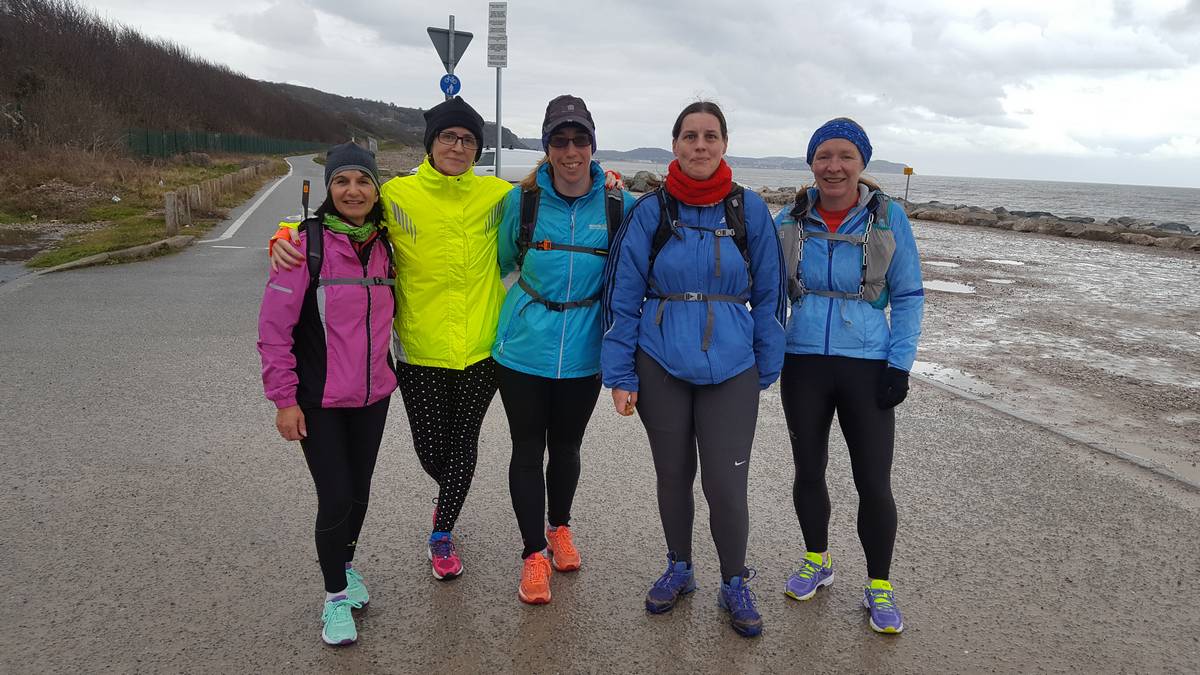 Eva Brewer (second right) with some of her Prestatyn Running Club colleagues who joined her for part of the run.

The bad weather also caused the cancellation of Saturday’s Welsh inter-regional cross-country championships in Brecon at which several Prestatyn members due to represent North Wales.

The only club member in competitive action at the weekend was James Rogers, who is developing into an ultra specialist. He travelled to mid-Wales for the Winter Run to the Castle event, a 42-mile multi-terrain race from Aberdyfi to Harlech.

The course included road, tracks and beaches, and though there was no snow around some sections were very muddy. James finished 22nd overall in a highly creditable 9 hours 20 mins 36 secs.

There was a much smaller field than usual for the weekly Parkrun in Conwy where Sian Beck made her debut. She finished 22nd overall and third lady in 21.45.

The draw for the club’s single place in next year’s London Marathon was made at a well-attended social event at the Blue Lion, Cwm, on Friday, and the winner was Jennifer Owens.