The annual North Wales Cross-Country Championships at Rhug, Corwen, once again proved a triumph for the host club Prestatyn Running Club with a haul of medals and the satisfaction of putting on a great event.

The outstanding individual performances came from Steve Skates and Amie Bagnall, both of whom improved on last year’s placings.

In the senior men’s three-lap race Steve, who was fourth in 2017, had a fascinating tussle with 2010 champion Ricky Challinor (Liverpool Harriers). After pulling away from the rest of the field they were shoulder-to shoulder most of the way before Challinor opened up a gap in the closing stages.

Last year Amie had a battle with veteran Andrea Rowlands (Eryri), who went on to win, but this time she had things very much her own way and was never under any serious threat as she took the North Wales title.

Other gold medal winners were George Nixon (M65), who held off his arch-rival Martin Cortvriend (Denbigh), John Hickman (M75) and Sian Beck (L40). The senior ladies were placed second behind Eryri, while the over-70s’ men were once again first.

In addition to the medal successes it was very satisfying to see some of the club’s juniors competing well in what were very testing, muddy conditions, and huge praise must go to the large number of marshals who braved the weather and mud throughout the afternoon. 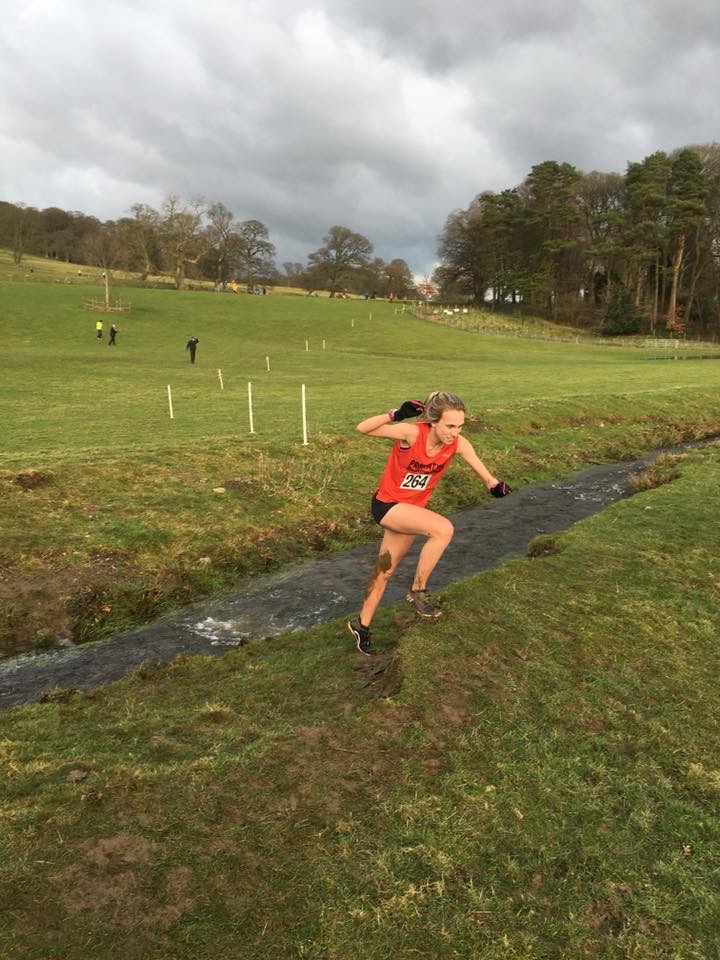 Amie Bagnall takes the stream in her stride on her way to victory at Rhug.

Val Jones was the club’s sole representative in Saturday’s Conwy Parkrun, coming home in 41.43, while Steven Brown was 80th at the Wepre Parkrun in 30.11.

On Sunday Hadyn Johnson represented the club in the Wirral Way trail half-marathon, and in perfect running conditions clocked 2-11.05. The same day Andrew Bromley joined a high-quality field in the Telford 10k, finishing 114th in 36.18.

This weekend sees an unfortunate clash, with some members doubling up in both Saturday’s Twin Piers 10k in Colwyn Bay and the third Borders League fixture in Abergele the following day.