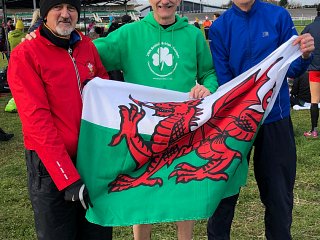 Prestatyn Running Club’s Gordon Jones was one of the stars of the Welsh team in the British Masters’ cross-country international at Aintree on Saturday, picking up a well-deserved team medal.

He was the team’s second finisher in the M60 class, finishing three places ahead of his rival Graham Jones (Shrewsbury), who was also running for Wales.

With the talented Ifan Lloyd (Swansea) fifth in the class they packed well and fully deserved their medals, which were the only ones earned by the Welsh squad on the day.

In the M and W 65/70/75 races Gareth Hughes was the third Welsh counter and 66th overall, while George Nixon ran in the open races for reserves which followed the international events.

In the highly competitive M35 competition the first Welsh finisher, in 29th overall, was Christian Prior, formerly of Prestatyn and now based in Reading.

There was a sizeable contingent from the club in the Conwy half-marathon on Sunday but at the time of going to press the official results were not known. Andy Clark took a massive 17 minutes off last year’s time in 1-51.28 and other known results are: Martin Gill 1-56.35, Kat Prestwich 1-57.23.

Only two members participated in the Conwy Parkrun on Saturday, Chris Yorke finishing second overall in 18.04 and super-vet Roger Harrison-Jones 216th in 30.43.

This Saturday another team effort is called for when Meirionnydd Running Club host the third fixture in the Grand Prix Express North Wales Cross-Country League for the first time. The Dolgellau course is understood to be extremely wet, with a full stream to cross on each lap.